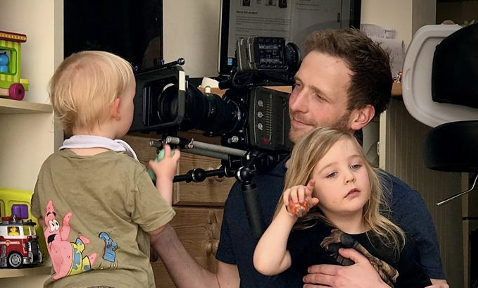 One of our first briefs during lockdown was to come up with the ideas for and produce four authentic films for one of the world’s leading baby and toddler brands, Danone. To be shared across the brand’s global social channels, the films needed to provide emotional support, guidance and ideas to parents in confinement around the world. So we identified four relevant themes for the content that reflected many situations that parents with young children many find themselves in during lockdown - ‘Bring the Outside In’, ‘Seek Out Silver Linings’, ‘Stay Connected’ and ‘Bond with Co-workers’.

Not being able to cast and shoot talent out in the real world, we tapped into our extensive network of parent filmmakers to self-shoot the films with their families, recruiting six with relevant-aged children aged 6 months to 4 years. Drawing upon their creative knowledge of filmmaking, as well as their experiences of being a parent in lockdown, our filmmakers shot the videos using their own high-end kit, and featured themselves and their families as the talent.

As soon as we went into lockdown, we immediately adjusted the way we worked both internally and with our clients, with online collaboration, video calls and remote working quickly becoming regular parts of our work habits. So apart from us not being able to collaborate with clients face-to-face in person, our usual creative development and scripting process was never going to compromised.

A bigger challenge was going to be briefing and orchestrating our six filmmakers remotely to make sure they were clear on the wide range of scenarios they needed to shoot with their kids in their homes, without having a director to guide them on location. We also needed to make sure they captured every shot required across all four films – something that our production team would usually meticulously manage in the background on the shoot.

Ultra-detailed scripts and shot lists were prepared by our creative team and sent to the filmmakers in advance of the shoot via google docs for them to review and discuss with our director. They were also carefully briefed individually at the beginning of each shoot day over zoom calls. As we wanted the videos to be as authentic as possible and have a slightly UGC feel, our filmmakers were then given creative freedom to set up and shoot each scenario in a way that worked best in their own homes and in their own style.

That said, for one of our films that was based around the theme of ‘bonding with your co-workers’, we organised and shot video calls between each filmmaker - while filming both sides of the call simultaneously. One video call included the whole creative and production team, which was filmed by three cameras and screen recorded as they were ‘crashed’ by the filmmakers’ little ones. Present on each of the calls, our director was able to remotely direct those shots in real time!

We had to schedule filming to take place at each filmmaker’s home concurrently over two days so that we could meet the tight project deadlines. To manage the capturing of every shot without being present, our production team created a master shot list on Google Docs so they could monitor in real time the progress of each of the six filmmakers as they each ticked off the shots on the list they’d been able to capture as they went through the shoot day. We were then able to ask filmmakers to pick up any shots we could see were missing on the master shot list.

Overcoming being apart in the edit

All editing and grading was completed remotely by our post-production team with full access to all the tools they’d normally have at their disposal. To meet the large number of deliverables in the ultra-fast turnaround time, we split the editing between two editors. At the end of each day’s filming, the filmmakers shared their footage with the relevant editor on drives delivered safely by couriers which were cleaned down by the editors before using them.

To overcome the hurdle of our editors and creative and production teams not being able to sit side-by-side during the edit, our editors regularly uploaded their rough cuts to Vimeo for immediate review and feedback over Zoom and Slack by the creative team. (We had already given ourselves extra time in the production schedule to allow for this inevitably slightly slower editing process.) Daily status video calls and instant communication over Slack between the editors and the production team kept the project on track.

In total, we delivered over 120 versions of the films including the four main films, cutdowns for every social channel in different aspect ratios, and with and without captions - all ready for international market re-versioning.

It was a process none of us had ever experienced before - all briefed, shot and edited in a few days, without any of us meeting face-to-face. What made it a success was the energy and commitment of everyone involved who had galvanised to create the emotive, beautifully crafted work that Be The Fox is famous for, within the challenging production restrictions placed upon us.

With social distancing measures potentially lasting for a long time yet, being able to shoot content close up with young children is probably not going to return to normal for the foreseeable future. So getting parent filmmakers to shoot at home is a highly effective filming approach for brands that want to continue to make content featuring young children safely, whilst not having to compromise on creativity or high levels of craft.

If you’d like to create engaging brand content by tapping into our network of over 50 parent filmmakers with kids from diverse backgrounds, please get in touch for a chat - [email protected]